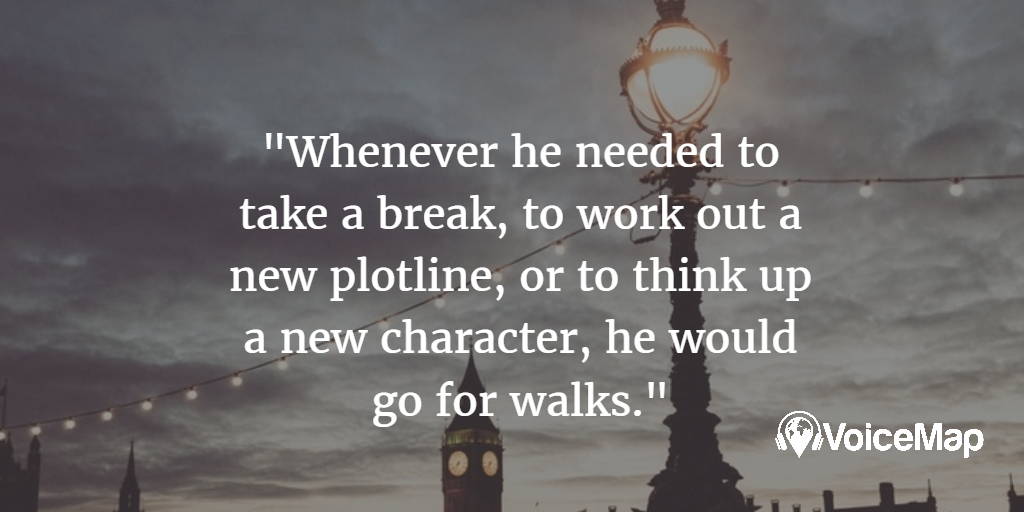 On 25 September, Charles Dickens’ great great great granddaughter and acclaimed author, Lucinda Hawksley, will launch her own downloadable GPS audio walk of Dickens’ London. Listeners can walk in the beloved author’s footsteps, exploring the neighbourhood where he drew inspiration for his novels, many of which were strongly shaped by his childhood.

The immersive audio experience was created in collaboration with VoiceMap, the international walking tour app that released a theatreland tour by actor Ian McKellen earlier this summer. The Charles Dickens from Furnival’s Inn to Doughty Street audio tour was designed to be done at your own pace at any time of day, but this Sunday, walkers will have an opportunity to meet Ms Hawksley during an open discussion at The Charles Dickens Museum, where the walk finishes. The museum is the only remaining house of Charles Dickens in London, and a 25% discount on admission will be offered after the event.

1. Install VoiceMap for iPhone or Android
2. Sign up with email or Facebook. Look for “Charles Dickens from Furnival’s Inn to Doughty Street” in the London menu.
3. Tap on the red download button. The audio walk costs £3.99. You can pay using your iTunes and Google Wallet accounts. Allow all the files to finish downloading before you close the app.
4. When the download is finished, the download button will change from red to green, and instead of seeing the price, you’ll see the word “Start”.
5. VoiceMap works offline and doesn’t require any data

If you’d like to attend the launch, simply arrive on Sunday.

Time: 11am – 12:30 (for the walk only.) Allow another hour for an open discussion with Lucinda Hawksley, and additional time for visiting the museum.

Meeting Point: Chancery Lane station, at the junction of Gray’s Inn Road and High Holborn (north side). If arriving by tube, leave the station via exit 2.

You’ll need: A smartphone (Android or iPhone) with VoiceMap’s app installed (and battery life), and a pair of headphones.

VoiceMap is an audio tour app that plays stories about your surroundings while you walk. The iOS and Android apps use your smartphone’s GPS device to pinpoint your exact location, and play audio automatically. Just put on your headphones and start exploring a neighborhood through someone else’s eyes.

Lucinda Hawksley is an author, broadcaster, lecturer and public speaker. She writes about literature, art, social history and the history of London, as well as biographies. Her books include “Charles Dickens and his Circle”, “Charles Dickens: A Bicentenary Celebration” and “Katey, The Life and Loves of Dickens’s Artist Daughter”. Charles and Catherine Dickens were Lucinda’s great great great grandparents and she is a Patron of the Charles Dickens Museum in London.