Not everyone is an audiophile, into the latest and greatest amplifiers and Hi-Fi’s, or a Sound Engineer with the know-how of the properties of noise, or even a techie nerd into all things gadgety. And that’s OK. I am all of the above and I’m here to (try and) help you!

If you’re reading this, I’m assuming you’re wanting to record some audio on your phone, and get decent results. But, you’re not sure where to begin…

Well, most phones have some sort of recording app already, but it’s probably quite limited in functionality, and quality – and for the purposes of your recording, we want the best audio that is possible! No point in making a recording that has incomprehensible, unusable sound, right? Right!

I’m not going to list every single app out there, because there are literally thousands! Instead, I’m going to point you to what I think are the best free apps for both iOS and Android, and give you a rundown of their functions.

The imaginatively named Voice Recorder is my top pick, and just happens to be one of the most highly rated recording apps on the Google Play store.

It has a nice simple interface (good for technophobes!). On the main screen are Record and Play buttons, as well as an input level meter, which shows how loud you are. (Pro tip: Keep the input level between the green and yellow bars. Red = bad).

In the Settings menu, you can pick the audio format: MP3 or OGG .The default is MP3, which is fine for us. You can also set the recording quality. Choose ‘Higher Quality’. We want the best, remember? You can also select where you want to save the audio files. If you’re not sure, just leave this as is.

Once you’ve recorded a take, you can press the pencil icon to rename the audio file. This is very useful for keeping track of what you’ve recorded, and makes it easier to identify the files.

Finally, there’s a Share icon. It’s the one with  three joined-up dots, next to the house at the top left. Tapping this gives you various options to send the audio file to whomever, wherever. Handy!

The inspiringly named Awesome Voice Recorder is my choice for iPhone users. 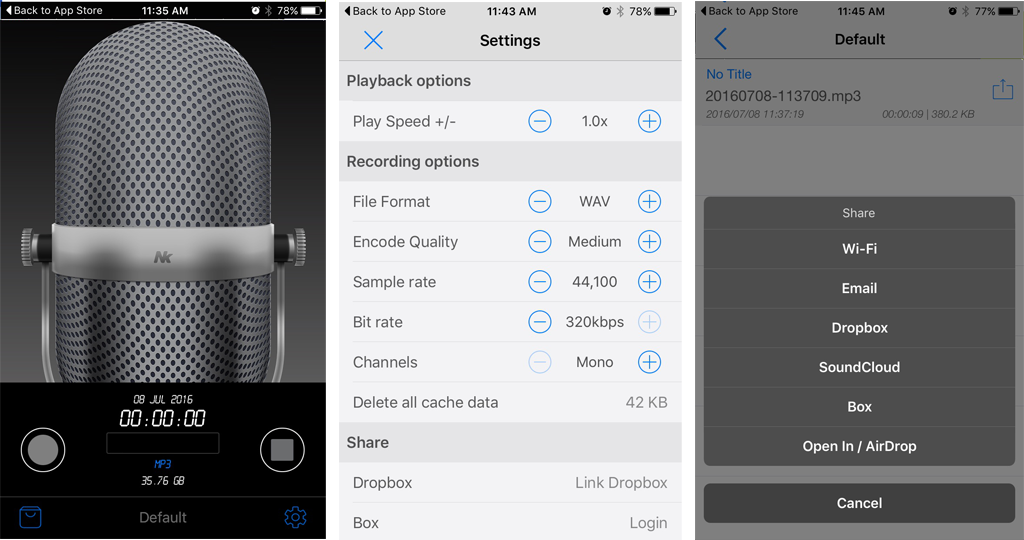 This app is a bit sexier than Android’s Voice Recorder, but is very similar with a simple interface. The main screen has Record and Stop buttons, with a waveform display showing what the sound file looks like as you record. There’s no input meter, but if the waveform looks like a solid bar, then you’re way too loud! See examples below:

You can also choose the save folder on the main screen for the audio file.

In the Settings menu, you can choose between MP3, WAV, and M4A as the audio file format.

If you need to keep the size of the file to a minimum, you can select ‘Mono’ in the Channel setting. Otherwise, the default ‘Stereo’ will work fine.

In the Folders menu, you can locate your recorded audio (the default location is ‘Default’), rename the audio file, and share the files via email, an MMS, or any FTP service you have installed.

What comes next, after you’ve installed your recording app? Is there’s more to it than just pressing ‘record’? Yes! Of course there is!

We want to capture your beautiful voice, and just your beautiful voice when you record. Ambient sounds and background noise aren’t desirable. Imagine listening to an audiobook, and being drawn in by the narrator’s dulcet tones, when there’s a sudden BANG!, or a cat yowling, or a humming air-conditioner. If you’d done a good job of immersing your listener so far, these noises from your environment would distract them, and you’d have to earn their attention all over again.

To get the best possible recording:

You’ve been talking since you were a wee baby, so what’s there to learn now? Well, not too much, thankfully:

Once you’ve recorded, listen to the result. Hearing your own voice can be weird, but you are the first gate-keeper of quality control! Getting it right at the source with a good recording is 90% of the work. You’ll spend much less time editing and trying to fix the audio than you would if you’d done a crummy recording job!